Marshall Barnes has not received any gifts yet

What do you do?
Writer

What is your hometown?
New York

What are some of your interests?
Music, Writing, Reading, Travel, Technology, Photography

Marshall Barnes is a 21st century renaissance man, the ultimate synthesis of artist and scientist. Think it's hype? Read his bio!

Marshall is the author of several currently out-of-print nonfiction books and he's about to self-publish a popular science book of his space-time continuum physics theory, in the form of an "art" book created through the use of his invention, the Programable Television Synthesizer(TM) or P.TVsynth(TM). The book is designed to become a cerebral experience when read with stereoscopic 3D glasses, which will make the art inside come alive. The book will be released by July 4th of this year and be supported by an audio documentary. A full blown regular text book version, replete with extensive scientific documentation that will support his theory in the face of current speculations on the nature of space and time (such as the idea that time doesn't exist), is nearly complete in manuscript form and will be marketed to a mainstream publishing house when the time is right. Agents take note.

Marshall has invented many other things, most notably the DEMI Sampling(™) process that out performs the musical capabilities of synthesizers, and perhaps his greatest invention of all, the STDTS proto-technology for warp drive has been established as the only viable technology to reach the stars at a number of space conferences including the 100 Year Starship Symposium in Houston, Texas last September. Eventually he plans on doing a worldwide proof of concept demonstration (with a sequel done in suborbital space in time). He plans a book about that as well. Because of the modifications possible to the STDTS tech, Marshall produced physical tests with a modified fan equipped with then STDTS field that realized the same kind of space and time twisting claimed to be predicted for a different design using a rotating laser by University of Connecticut physics professor and author of the book, Time Traveler, Ronald Mallett. Since the book has been released, and Spike Lee has purchased the film rights, the book has been published in multiple languages around the world. However, Mallett is more than $250,000 from even beginning to test his theories and Marshall defeated Mallett in a race to be the first man in the world with a machine that demonstrably effects time and Mallett has lost all claims to having the world's first time machine. Marshall has just recently gotten a worldwide TV distribution deal offer for a documentary dealing with the STDTS which is in the planning stages now.

In 2009, in a book proposal on the nature of time, Marshall accurately predicted that the subject of the nature of time was going to be the next hot topic, and since then there have been at least 5 books published on time related topics and more articles in magazines, such as Scientific American, while none have answered the big questions that Marshall discussed in his proposal. Marshall is planning on holding that project in reserve until he can get a major publishing deal for it. Simultaneously, he is quickly establishing himself as the man proving to be smarter than Stephen Hawking, by not only finding mistakes that the famous astrophysicist has made, but showing that students as young as those in the 4th through 6th grades can detect them as well, proving that J. Robert Oppenheimer, the father of the atomic bomb, was correct when he mused that, "There are children playing in the streets who could solve some of my top physics problems, because they have modes of sensory perception that I lost long ago". Marshall's proof of concept project for his prowess in science writing will be his self-published (through Blurb) critical work on Stephen Hawking, titled, Space Warps and Time Tunnels: The Infamous Legacy of One Stephen W. Hawking. It will be the first ever work that takes a critical eye to the work and theories of Stephen Hawking, particularly in relation to the nature of time and time travel and proves that in those areas he is the most overrated physicist in history. Never before has anyone covered so much of Hawking's work and not only showed how it was wrong, but why he got it wrong, why none of his peers caught it and then gives the correct answers supported by solid evidence, physical experiments and thought problems.

As a writer, his concentration is on nonfiction, primarily science, however he has a book of poetry called, Life Without Love, and he has a book planned dealing with seemingly paranormal connections between himself and the TV show Fringe in the works, which is spawning a webcast TV series that will be a weekly program. He also owns exclusive rights to an unpublished manuscript and A/V material regarding secret research done during WWII.

A skilled lecturer with over 30 years of experience with print, radio, and TV media, and web media for nearly 20 (including two Yahoo! chat events of the week), Marshall has appeared in lectures and media across the U.S. and Canada. He participated in his second USA Science and Engineering Festival in 2012 inWashington D.C. which used a photograph of children looking through one of his other inventions as the largest image on its promotional cards - the Visual Density Reduction Window™ which makes thing look optically invisible. Marshall is a world leader in the science of optical invisibility which forces him to restrict information concerning it because of its military applications in the execution of lethal tactical attacks using a variety of methodologies on land, sea and air which could result in a National Security threat. His public demonstration with the Visual Density Window™ are strictly with a basic toy level version of the technology which is not on the same level as that which has become weaponizable.

Marshall is a member of The Philosophy of Time Society, InformalScience.org, the Edutopia community of the George Lucas Educational Foundation which just recently made him a Featured Member of the Week, The Ohio STEM Learning Network, National Lab Day, the STEM Ed Coalition, the National Alliance for Media Arts and Culture web site, a Promotional Partner of the USA Science and Engineering Festival, Informal Science, STEM Education Association, Change the Equation, Innovation Excellence, Nine Sigma's Nine Sights and a member of Researchgate.net where his comments are followed by over a 170 scientists, engineers, students, researchers and business people from over 19 countries around the world. He has won affiliation with Theiss Research which will represent him in matters of government, institutional and foundational funding for scientific research projects ranging from advanced concept technology to the practical application of the extreme implications of quantum mechanics.

In 2012, he was added to the roster of world scientists, engineers and researchers involved with Scientific American's, 1,000 Scientists in 1,000 Days program.

Marshall is being considered now for full representation by a major entertainment talent firm known round the world for promoting its artists in motion pictures, music, television, radio, theater, books and public speaking. Once negotiations are complete, a formal announcement will be made.

Next year is the 50th anniversary of Star Trek. To go along with this anniversary the documentary STDTS: The World's First Warp Drive will be released, which is about the first ever prototype technology to make warp drive a reality. As well as being an intriguing story of a breakthrough scientific development of the ages, it is a 21st century version of the classic of the lone inventor taking on all the usual obstacles and then some, and winning.

The international release of this…

Introducing the book that sets the record straight about the subject of time travel. Based on the first ever special report for select members of the United States Congress on the subject, and written by Marshall Barnes, R&D Eng, the inventor of the first time machine (…

Introducing the book that sets the record straight about the subject of time travel. Based on the first ever special report for select members of the United States Congress on the subject, and written by Marshall Barnes, R&D Eng, the inventor of the first time machine (…

Paradox Lost: The True Geometries of Time Travel - The Public Edition is on the horizon. 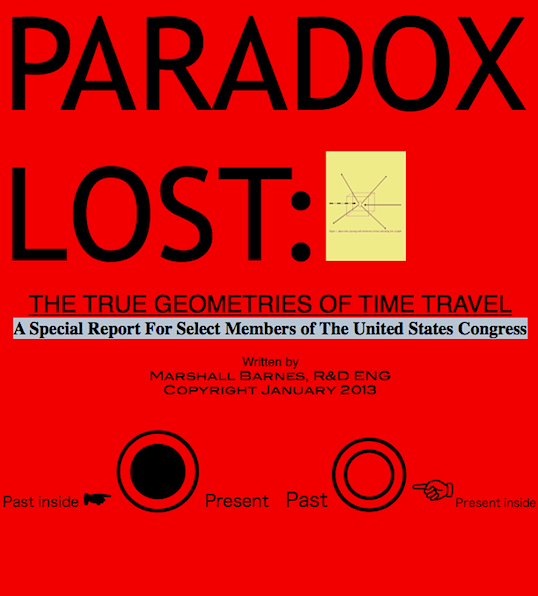