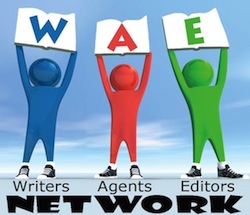 The Writers, Agents & Editors Network began as a vision several years ago shared by Literary Agent Jeff Herman and his partner and spouse Deborah Levine Herman. As technology rapidly transformed publishing, the two saw the need to bring to life the information that Jeff Herman has been sharing for over 20 years in his yearly tome “Jeff Herman’s Guide to Book Publishers, Editors and Literary Agents,” especially as it relates to promoting positive relationships between writers, agents and editors.

“One of the book’s features most appreciated by its more than 500,000 readers is the literary agent section. We get the agents to respond in their own voices to a range of provocative questions, and to provide their opinions about industry trends. Writers want to see agents as individuals with unique personalities, not just as names and factoids.” Herman says.

This led to the idea that many writers work in isolation. While conferences are great, the internet has given us the opportunity to reduce the size of our world. When we began the network in 2011 we received an email from a writer from Asia who said he had never had the chance to communicate with other writers. We welcome you to a place where you can network, learn and share your ideas.