Nonfiction writing is not simply something you do while waiting to finish your novel. This group is for non-fiction writers of all types including journalists, pundits, business people and memoir writers. Anyone who loves to write, read, represent or edit things that are factual will find a home here.

The nonfiction book proposal is a necessary tool for anyone hoping to publish. It helps you create a blueprint and gives you something to send to a prospective agent or editor. It affords you the opportunity to submit your work without needing a full manuscript. If you choose to self-publish or go the indie route it is still important to master this process. The more you think through your book and your marketing plans the better.

We are happy to announce the newest edition of the bestselling "Write the Perfect Book Proposal." This is our third edition and it is hot off the press. There are many additions to the book including addressing the changes in the publishing industry and methods of accessing the internet to build your writing platform. 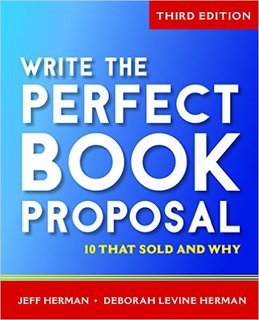 What do you like the least about writing a book proposal?

Many nonfiction writers are reluctant to approach the book proposal. There are parts of the process that are more difficult than others. If you have tried to write a proposal what do you find to be…Continue

DO YOU THINK IT'S GOOD TO HAVE A LITERARY AGENT?

Do you have/want one? Why/why not?Continue

Do authors have a responsiblity towards readers of today?

Promote Your Book: Links to Bloggers Who Interview Authors

Here are some bloggers who interview authors - an excellent way to promote your book:Eri Nelson: Wonderful Reads of the Month - …Continue

You need to be a member of Nonfiction to add comments!

Hi, everybody, I've just gotten approved and am excited to be here.  At the moment I'm just wrestling with technical problems.  I can't seem to get my photograph onto my page.  And I've sent emails to the admin address in the "Contact Us" menu and had them returned.  Can anybody talk me through the photo process?

Then I want to talk about my non-fiction book and get as much advice as I can!!

When textbooks are published by large publishing houses, how much responsibility should fall on the author(s) for marketing/promotion?  Does any one have any recent experience with this?

Hope everyone is doing great today, tomorrow will be an even more special day! Put a new link on my website after seeing "Gravity" (what an incredible message right?!!) Hope to be teaching skiing and snowboarding at The Love (Loveland) again this season and start flying again too! Everyone Keep On Shining!! Love, Joseph - the site is dipentinodesign.com

I don't know how many members of this group are interested in a story about wartime separation, but I want to share my good news with you. Once Upon a War, The Diary of a Waiting Wife is now available for preorder on several websites, including https://hellgatepress.com/joan-diehl/once-upon-war

Anyone who has waited for a loved one to return from war will relate to this story. For sixteen months, I was a single mom of five young children in a waiting wives community located in Salina, Kansas. Diary excerpts, letters, and newspaper articles offer glimpses of life at home, in the war zone, and on the streets of our cities, where political turmoil and denigration of the military prevailed.

The book isn't long, so I hope some of you will find time to read it. Reviews are welcome, including negative ones, provided they're constructive.

When writing non-fiction is it best to outline the whole book in detail or free write it as you go? I have been asked to produce a book on a local group here on Cape Cod for sales next summer. I don't know which way is best to approach a project of non-fiction. Thanks, Donna

I have finished writing my memoir, still in the "typing" phase though.

I recently finished my Memoir about my experience with an unexpected triplet pregnancy and the death of my husband which occurred a few short months after the birth of our three babies. I've been working the traditional route of querying agents and trying to make connections. In addition, I want to start marketing myself via social media, etc... The following is a snapshot of my story and I'm looking for any advice/suggestions on how to personally market such a thing.

At 34 LuAnn was living the dream. She was married to her childhood sweetheart, teaching, photographing, and on top of her little world. Who would have guessed that a triplet pregnancy, insecurity, fear, and crack cocaine would threaten to destroy her within one short year? After an extremely difficult and high risk pregnancy she gave birth to two handsome boys and one tiny, tenacious girl. After a two month neo-natal unit stay, and a quarter of a million dollar hospital bill all of her premature babies were healthy enough to come home. A week later, LuAnn discovered her husband smoking crack cocaine in their basement. Two weeks later, she found him dead in the family room. I should also mention that LuAnn is me.

Polishing with Ashes is the true account of the cyclonic events of 2007, and significant flashes of my life prior to that time, as well as the quest to return to a life I could recognize as my own. Through my painful experiences I was able to not only get back on my feet, learn to laugh again, and, for the first time in my life I was able to find a comfortable, safe place within my own life. Polishing with Ashes may be best described as the DutchYarn Bomb of memoirs. It is surprising, funny, sometimes complex, colorful, well constructed, and most of all, meaningful.

Hi Everyone, I just joined.  Please feel free to add me or send a message to say hi :)

Thanks Guys I just had my first piece published  tell me what you all think .. It is just an e -mag but it is something http://articles.complexchild.com/sept2012/00407.html