How to Write Funny

What is writing funny? Scott Dikkers the mastermind behind and founder of The Onion can break it down for you. He makes it look easy but it is anything but. Based on his book by the same name WAENet is happy to introduce this new group with Scott Dikkers as the moderator. Scott Dikkers is a #1 New York times bestselling author who founded the Onion.com. He co-wrote and edited The Onion's "Our Dumb Century," which has sold more than a half-million copies and was awarded the Thurber Prize for American Humor. Among the many other books written or co-written by Dikkers are "Our Dumb World," also a New York Times bestseller. "the Onion's Finest News Reporting," which topped 200,000 in sales, the self-help parody "Your are Worthless," the New York Times bestselling "Jim's Journal" series and the unauthorized autobiography of President George W. Bush, "Destined for Destiny."  His newest work “Trump’s America: The Complete Loser’s Guide” is published my Micro Publishing Media, INC and WAENet co-founder Deborah Herman through the imprint Blaffo Books.

Purchase Trump's America by clicking on the picture. 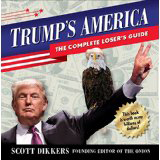 Purchase "How to Write Funny" By clicking on the book.

This group does not have any discussions yet.

You need to be a member of How to Write Funny to add comments!

I laughed out loud at Tom Garrison's comments. I really understand both theories.  I personally subscribe to the cussing one. It is a stress reliever for sure.  Potty mouth at times is plain 'good English'. Driving our RV around, my wife swears, (no pun intended) that I have Tourettes.

The Art of Swearing

“Gol darn,” and my head jerks around to find the source of such a wimpy profanity. Could it be the disgruntled customer who just had a cup of scalding coffee dumped in their lap and that’s the best they come up with? Sheesh. If you are not going to swear with flair, don’t do it at all.

Excepting the last two years in St. George, I spent my entire life in California. People there, now they know how to swear and often for the slightest of reasons. A common occurrence here, say crazy driving while a cell phone is glued to the drivers ear, that elicits a powerful “gosh darn that crazy driver” in Utah, would, in California, spark a string of expletives that could peel paint along with a pointed gun finger shooting the perpetrator. Clearly there are regional differences regarding the art of swearing. But is swearing a good thing, part of life, or a sign of incivility?

There are two broad theories. One is championed by our first president, George Washington, when he said:

The foolish and wicked practice of profane cursing and swearing is a vice so mean and low that every person of sense and character detests and despises it.

There ought to be a room in every house to swear in. It’s dangerous to have to repress an emotion like that.

The research tends to support the theory that swearing is a widespread, but underappreciated anger management technique. A little cussing as a reaction to pain also seems to function as a pain reliever. However, the overuse of swear words tends to diminish their beneficial effect.

Those who are multilingual are a leg up on comparative cussing. Ask anyone who has learned a new language from non-teacher speakers of that language—some of the first words they are taught are swear words. I know many Californians who can’t speak a lick of Spanish, but they do know a few Spanish cuss words. Those nasty words, while the potential harbinger of social censure, do seem to have a universal appeal to the little devil in all of us—particularly males. Research into the swearing practices in the US indicates that men generally curse more than women, unless the women are in a sorority. Perhaps the sorority gals should hang around with the drunken sailors?

While I was working fulltime at a stressful job, swearing was for me not a constant companion, but at least a fairly well-know acquaintance. Did it help? Yes, some tension dissipated. Was it worth it? Sure, a little in-private cussing (make sure it is private) clearly expresses your emotions—in general a good thing—and reduces a smidgen of stress without chipping away at your hard earned reputation.

If you are going to swear, you must adhere to “Tom’s Three Rules to Swearing.” Following these rules will acknowledge the anger management aspect of swearing without endangering your social standing.